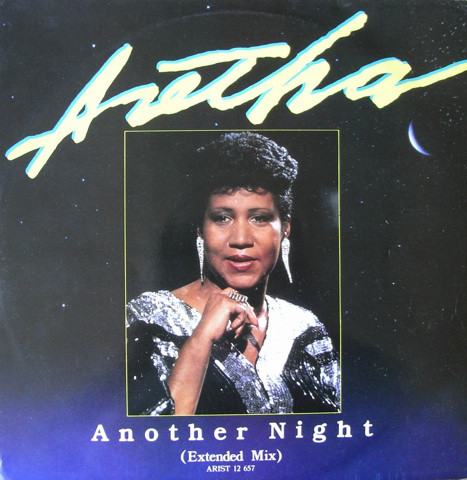 In life’s challenging moments, the best we can do is take it one day at a time. In Aretha Franklin’s case on “Another Night,” it’s one night at a time. The fourth single from 1985’s Who’s Zoomin’ Who? became a top 30 hit and top 10 R&B record for Aretha, who was enjoying a renaissance era with the album.

“Another Night” brilliantly illustrates the moments that precede a dissolved relationship. “All my friends have to ask if I’m shattered,” Aretha begins. She brushes it off, declaring that “I’ll be fine even if I gotta fake it.” The song straddles a range of emotions that accompany the post-relationship state of mind. In places this is a defiant and resilient proclamation. But it also reads as a pep-talk of self-reassurance, reminding herself that she can indeed make it. “I know I can get through another night. It’s only another night,” Aretha tells herself.

She also turns her focus towards her former flame to assure him that she’s moved on. Any chance of reconciling is dismissed with “you better face it, I won’t be calling.” She even incorporates a spoken-word bridge where she implies that she was holding all the aces, revealing that “I had someone else too.” A later “my man! I don’t need you to be bringing me down!” is the final dismissal, which is perfectly depicted in the song’s music video.

Aretha stepped in front of the camera once again for “Another Night,” which was only her third music video. The video was shot in Detroit to accompany “Another Night,” and immaculately brings the storyline of the song to life. Aretha plays the part of a newly solo club act and showcases her sassy side as she sends off this two-timing ex-lover and duet-partner while dominating stage.

“Another Night” is magical because of Aretha and that voice, which overflows with intensity. She sounds invigorated and she sounds hungry. The best Aretha recordings possess a fiery quality, and this is undoubtedly among them. Aretha can make anyone believe any lyric when she puts her all in it, and her all is in this. You believe every word she says, and that makes this record a real crutch on those days when you find yourself playing the part of the jilted lover.

What also helps “Another Night” come to life so well is the landscape Narada Michael Walden lays out while doing double duty as producer and percussionist. Walden’s performance on the percussion lays out a driving beat that’s built to house the resilience that recurs throughout “Another Night.” His production also easily assimilates the record to the pop landscape of the moment. He was, after all, producing Whitney Houston’s breakthrough uptempos (1985’s “How Will I Know” and 1986’s “I Wanna Dance With Somebody”). The guitar work of Corrado Rustici (who also lent his skills to Whitney Houston’s “How Will I Know”) also helps give it an “in-the-moment” sound, and the rest of the credits are a who’s who of notable musicians. Walter Afanasieff and Preston Glass share keyboard credits, Randy Jackson handles the bass, and Sylvester is among the background vocalists.

The song was composed by Roy Freeland and Beppe Cantarelli, and marks their only work with Aretha. Freeland is a career songwriter with a long list of credits. Cantarelli in a similar position as a composer albeit with a shorter list, although he notably composed Brenda K. Starr’s “I Still Believe,” which became a top 5 hit when Mariah Carey covered it in 1998.

A suite of remixes also accompanied “Another Night:” A dance mix, dub mix, and single mix, which have since been made available to stream. The dance mix even contains a few alternate vocal flourishes, though most of it remains the same. The dub mix also incorporates numerous elements from “Who’s Zoomin’ Who?”

There is but one recorded performance of “Another Night,” taken from the American Music Awards. It was taped via satellite from Detroit, and spares no bit of drama when Aretha sheds her Evil Queen-esque cape mid-performance, like she’d famously do with her fur in 2015.