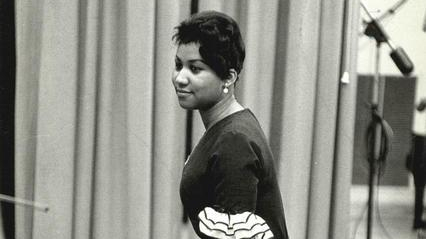 On December 21, 1961, four days before Christmas, Aretha Franklin walked into the Columbia Records recording studios at 799 Seventh Avenue in New York City. As she recounted to David Ritz, she was homesick for her family in Detroit. She’d been living and recording in New York for a good period of time by then. Her major label debut album came out earlier in 1961 and she was finishing up her sophomore LP. She was also just about 8 months pregnant with her third child.

She recorded four sides that day, a third of her sophomore Columbia LP, The Electrifying Aretha Franklin. It was the second and final album she’d record with John Hammond, the producer who’d sought out and signed Aretha to Columbia nearly 2 years earlier.

“Blue Holiday” was one of the sides selected. Written by “Sixteen Candles” composer Luther Dixon, the song was originally recorded by girl group The Shirelles earlier in 1961. It landed as the b-side to their classic single “Mama Said”, but didn’t get nearly half the attention that its’ A-side received. Their version is arranged as a teen pop-ballad, full of sadness over a man who’s gone away.

Aretha, following the vision laid out by John Hammond, takes the song in a much jazzier direction. Flanked by bandmates of Miles Davis (who had just done Kind of Blue with Davis just 2 years earlier) and Count Basie, Aretha laid down a cool, jazzy, bluesy track with deeply soulful vocals that most 19 year olds could only dream of conjuring up.

As Joe Newman, who played trumpet on the session, recalled to David Ritz, “I figured Aretha Franklin was one of those up-and-coming chicks, like Dakota Stanton, who wanted to be Dinah Washington. Man, was I wrong! Aretha was the real fuckin’ deal! I mean, she cleaned our clocks… she floated over (the groove) like vintage Sarah Vaughan. Only- at least to my ears- she had more soul than Sarah, more church, more funk, more hurt.”

Her vocal on “Blue Holiday” is jarring. The quantity of emotion and experience that she’s able to elicit are simply not what a 19 year old should be able to emote. Yet there she is, delivering hysterics that imply years of pain and heartache. Her final stanza of “it’s been a blue, oh a blue holiday since you’ve been gone” is an untethered cry of angst. And for all its power, it demonstrates room for development of vocal control. Simultaneously, it alludes that with the application of some technique, Aretha could conquer the world.